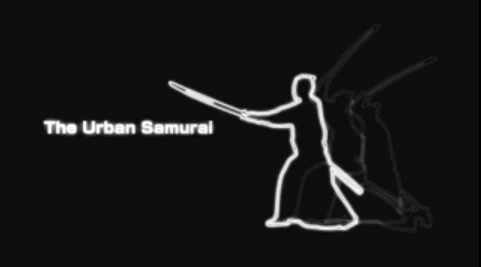 Title screen from the viral web movie series “The Urban Samurai”, Alien-Eye circa 2005

The second post in my “becoming a creative hybrid memoirs” series, describing my experiences growing a hybrid creative company in Tokyo which I co-founded in 2004. This chapter covers roughly the 2nd and 3rd years of Alien-Eye, during which we struck upon a winning formula for creating viral video contents in Japan, and came of age as “growth hackers”, the more recent term for marketers that focus on high impact low budget growth tactics on digital. This period also includes the emergence of Mixi as a cultural force in Japan, which we embraced as the first open social platform for sharing content and which marked the paradigm shift from “viral” to “social”.

In my last year in Ogilvy Japan, prior to establishing Alien-Eye, a school friend visited me in Tokyo with his girlfriend. After leaving school he had gone off to study fine art, creating a wonderfully free-thinking house of artists near the excellent art college where he studied. After each term of mind bending physics and applied mathematics at Oxford I would escape to his retreat and plug into the alternative vibe.

By the time I was in Japan he had established a boutique fashion label “Rogue Chimp” (this was way before Bathing Ape emerged, in case anyone was wondering!). He was keen to bring the chimp to the uber-fashionable Japan. I managed to identify a potential first distributor, a fashion entrepreneur who ran a graphic design based clothing label called “Shop 33″ that was tied into the graphic design cultures of both Japan and the UK.

Although my friend’s label never made it big in Japan, it was a significant episode both for Alien-Eye, since “Shop 33″ became our first viral campaign client, and also for me personally as the owner also inadvertently introduced me to the woman who became my wife, mother to my children and love of my life. So in some ways my children owe their lives to a rogue chimp. It’s funny how the world works sometimes!

The brief from Shop33 was to grow the notoriety of his brand in the UK, and we told him that with as little budget as he had his only hope was a viral video based campaign. The concept that Dicky came up with for the videos, “The Urban Samurai” deliberated played off Japanese traditional culture, but blended with contemporary elements, like the seedy sets and the slick title sequence. The title track was “inspired” by a 70’s TV anime theme track, but recreated with a big hip-hop base treatment. It was designed to appeal to the UK’s graphic design and fashion creative community who we knew perceived would be intrigued by this sort of aesthetic and quirky stories.

It was a significant milestone on the path to becoming an accomplished “growth hacker”, not so much for meteoric success of the campaign, since it was not meteoric although did OK, but because it exposed me to the ferocity of the singular success metric, in that case video views, and this in a world before YouTube, if you can imagine that!

The following year after launching the Shop33 movies series, entitled “The Urban Samurai”, we started using YouTube as an online reel, and the videos can still be seen up there.  Here is the second from the series:

If you have never lived day and night for a period of your life by a single metric then I do not think you can call yourself a growth hacker. There is no hiding from it, and without a media budget, seeding slush fund, or some other way of buying success, it is both crushingly transparent and liberatingly honest as a measure of the worth of your efforts. Over the years since I have lived-the-single-metric on numerous campaigns and growth-hacking pushes for brands, and although I now have a bigger team with more skills sets to help make them a success, the excitement remains undiminished. Although the web is a much more sophisticated creature now, in many cases it does all come down to a single metric, albeit with quality checks.

Based on the Shop33 experience we pitched and won a similar pre-YouTube video based campaign for an international low cost airline trying to break into the well-protected Japanese market. Working with a very smart and liberated soul at their agency we came up with an idea, probably for the first time (that we got to execute anyway), that was a perfect fit for Japan. An international band had licensed their global hit track to the airline. Digging around we noticed that a Japanese comedian had won the world air guitar championships in Helsinki, where they like their air guitar, performing to this same tune.

Forget clever, conceptual creativity, do not ask your audience to think deeply, but instead create an original cultural realm married with an aesthetic space of the moment and run with it. Thus was born the world’s first air guitar video submission contest. By this time we had realized the importance of tying into offline touchpoints to activate online buzz and so created air guitar booths at the band’s concerts, and creating seed content to inspire users to create and submit their own. It was also through this campaign that we managed to pull in a multi-talented Japanese producer, a guy with a common touch for creative in any channel and who could get stuff done. He later became my main partner in the business.

By the time we were leading this crazy air-guitar subculture, another force was at work that was multiplying the effectiveness of our efforts. Mixi was here and with scale. It marked the shift from the ‘viral’ era to the ‘social’ era, pretty much before anywhere else in the world, at least on a significant societal scale. Essentially a copycat of Friendster, the SNS that laid the ground for Facebook but paid the price for being too early, Mixi was the right social model for Japan’s privacy conscious users of the era.

With anonymous accounts, and driven by the passive “footprint” social mechanism (members can see which other members looked at their profile page), it hockey-sticked, boasting a billion monthly PVs on PC before Mark Zuckerburg had his braces removed, and a billion on mobile before Facebook was a blip on VC’s radars. All of sudden cool people had somewhere to hang out online, a galaxy of communities sprung up around common interests, informational needs and gossip, and at last there was a platform within which content could really thrive.

We soon realized that it was all very well making interesting content, but you need people to help socialize it to make a business out of it. One of the best hires we made at this time was a make up artist who we had used on several of our video shoots who had a big network on Mixi who had been spending his time between styling fashion shows transcribing computer code. We told him to spend the time at our office instead. He is now one of our top creative producers working across all kinds of brand categories. It is funny how things turn out.

The next instalment, Chapter 3 – Culture hack 2007 can be read here!