I recently discovered this little gem of a video describing Japan’s trend towards greater ethnic diversity. It is interesting to note the not inconsiderable numbers of immigrants living in Japan, around 2.3m out of a population of 127m as of 2010, the vast majority of which are Asian.

Taking the UK as a yardstick, like Japan an island nation that was never colonised by immigrants in the way that say North America was, at least since prehistorical times, but which started its journey of multi-culturalization a good century or two before Japan did, in its 2001 census 85% of the population described themselves as “white british”. So Japan still has a long way to go, but it is on its way.

All immigrants contribute to the cultural diversity of a country, but not necessarily to the creation of hybrid families. Some do though. According this video, in 2010 there were 30,000 mixed marriages in Japan, and ~2% of children born in Japan were of mixed race. Again this is low compared to some countries, but compared to Japan not so long ago, it is clear that steadily things are changing. 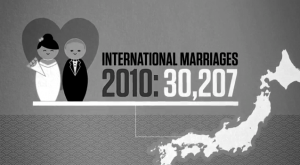 Screenshot from video created by Hafufilm.com

Of course this trend is not unique to Japan. In fact, emigration and ethnic intermarriage is by far the most dominant force on the collective human genome. According to the pre-eminent biologist and evolutionary geneticist, E. O. Wilson, “The impact on humanity as a whole, even while still in this current early stage, is an unprecedented dramatic increase in the genetic variation within local populations around the world. The increase is matched by a reduction in differences between populations”.

So while locally variation is increasing, even in Japan as this video describes, statistically the variance of human genes around the world is going down, which worries some population geneticists. This seems to me like a small price to pay for the rest of us to enjoy “local variety”!

For those like myself who struggle with statistical ideas like variance, imagine the distribution of humanity’s genes say 500 years ago as mountainous islands with big stretches of oceans in between them. With modern emigration and intermarriage those mountains are being eroded down and the gaps between the islands are filling in, bridging between them, with a myriad of new racial hybrid humans.

The areas that are being filled in represent uncharted territory for human genotypes – the space between anglo saxon and Japanese for instance is being filled in with each “half” Japanese half anglo-saxon who is born. Multiply that up by all the combinations of race and you have an explosion in the number of ‘types of human’ on the planet.

But if this trend continues to its logical conclusion, the landscape will end up completely flat with no gaps, valleys or mountains anywhere. There will be many more “types of human” around than before, but the variance will be nil.

This eventuality seems a long way off, but it is perhaps not so far fetched to imagine that two cosmopolitan cities geographically separated, say London and New York, could end up the same genetically when looked at as a population.

Why did these isolated islands of genes exist in the first place? Homo sapiens evolved into anatomically modern humans in Africa, and then set out to colonise the entire planet starting a mere 70,000 years ago or so, reaching as far as Australia by 50,000 years before the present, and finally jumping across the bearing straits to the Americas as recently as perhaps 22,000 years ago.

This is very little time indeed for selective evolution to act. Traits such as skin colour are adaptations to varying UV exposures at different latitudes, but actually, the vast majority of the genetic differences between what we call races is not due to local natural selection, but to random genetic differences in the bands of humans that set out from Africa at different times, and then diverged further through genetic drift, a phenomenon which as the term suggests, has no selective direction.

What all this means is that while race and population genetics is a really fascinating area of science on a global level, those of us who have mixed-race children should not try to read too much into their genetic combination beyond what they look like. Obviously, since this would amount to an affirmation of racial prejudice. And in this sense, the way we look at our “half” children is no different in any way at all to the way any parents look at their child who is genetically half them, and half their partner. Every child, every human is a new type of human, wherever they get labeled on that genetic map of the world.

However, where I think us mixed-marriage types do get to think of ourselves and our progeny as special is in the area of cultural hybridisation. What does it mean to be exposed to two quite distinct cultures from birth compared to a more homogeneous cultural upbringing? I am not exactly sure, but more than genes, this is the interesting question.