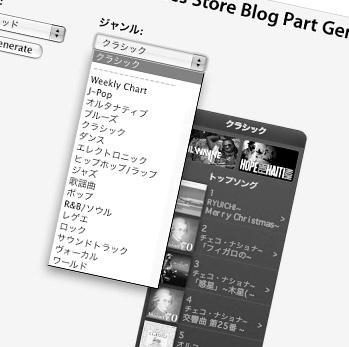 The fourth post in my “becoming a creative hybrid memoirs” series, describing my experiences growing Alien-Eye, a hybrid creative company in Tokyo which I co-founded in 2004. This chapter covers the period from 2008~09 or so, and describes the microblogging boom that exploded around that time and some of our exploits with it.

With the novelty of Mixi peaking out, the next big wave to hit the Japanese web was the micro-blogging boom around 2008 to 2010 that  made Japanese the most blogged language on the planet for a while. During this time everyone who wanted to be with it and online had a blog, It was a lifestyle accessory.

Although blogs had been around since the 90’s, they were now not just for geeks but for anyone who was brave enough to stick their head up above the parapet of Mixi’s anonymity and declare their lives open to the public (although many of the blogs were also anonymous), and web giants like CyberAgent grew off the back of new blogging platforms that for the first time pulled in celebrities from traditional media, such as magazine models and TV talents.

It was significant, not least because Facebook would not have succeeded in Japan if the microblogging boom had not broken down the “closed-ness” of Mixi. Facebook also likely benefited from the blog-weariness that followed the blogging bubble.

During this time we had started working with the iTunes division of Apple in Japan, who were looking to grow their music downloads business rapidly, and later apps. They had already got their catalogue of Japanese artists up to critical mass, but perception lagged behind and most people saw them either as software for ripping rental CDs, or rightly more as a store, but one that only had foreign artists, hard as that is to imagine now. This time the solution was a technology hack, but one that played very much of the design iconography of the early iPod series, as well as blog-fashion consciousness of the times.

One of the strongest drivers of the blogging boom was the culture around styling your blog with the right colors, characters, favourite brands and accessorizing with blogparts, since so many of the blogs of this time were lifestyle accessories, rather than a medium for sharing experiences, ideas of opinion. Known outside of Japan as “widgets” blogparts were the focus of a lot of attention for a while, with media sites ranking and reviewing them and media spends promoting branded blogparts.

Our solution was to suck the chart data out of the music store via the RSS feeds and insert it into customisable blogparts that were designed to look as similar as possible to the iPod Mini, and later the iPod Nano series.

Crucial to their popularity was to allow them to be customised to the style and tastes of the host blog. Firstly the colour could be chosen from among the official iPod colours. Similarly the chart genre could be picked from among a dozen genres, from JPop to HipHop, meaning that the look and musical taste of any blogger could be satisfied.

In general this approach, essentially a product range strategy, of creating a line up that is consistent in form and hence recognisable as part of the lineup, but customisable in the details, is a real winner in the consumer psychology of Japan. It is for instance the cornerstone of UNIQLO’s success. They popularise a line of clothes that are identical in all but colour, but then make 20 subtly different colour varieties of it. This allows consumers to buy into the same look as everyone else, while feeling that they have made a unique choice.

Our blogparts were really right for their time and place, a blogging culture hack that had the Apple brand behind them, so we knew if we got them in front of the right people they would soon take off. First we promoted them through the blogpart ranking sites, with both media and editorial placement. We also ran highly targeted banners that featured on the blog update confirmation page on major blogging platforms like Ameba and LiveDoor. We also did some seeding with music influencers who had blogs, but only a handful.

They quickly took off and within the space of 6months were on the blogs of 15k music scene influencers and fans, and had huge UU and PV counts every month. In fact, the Google Analytics tracking code we had in those blogparts gave us so much interesting insights into the blogging culture.

With such broad visibility among the digitally savvy music scene the solution played an important role in shifting perception of the store’s catalogue as well as channeling a lot of users to the store, and all this for a pretty insignificant development cost upfront and then modest hosting fees every month.

Digital music downloads have long been dominated by downloads to mobile devices, and these revenues were all controlled by the carriers. So although iTunes was always growing in Japan its inflection point was of course the arrival of the iPhone, and carriers have not had it quite so easy ever since. Although the App Store was around before the iPhone launched in Japan for the benefit of iPods, again it was the iPhone that made it take off.

So our blogparts were also plugged into the App Store chart rankings RSS feeds, and away they went driving millions more impressions on a different set of blogs for virtually no extra cost.

The widgets were initially built in Flash, and worked just fine, but after a couple of years of garnering millions and millions of free impressions every month for the iTunes Store and its products we were told that Flash could no longer exist in the Apple ecosystem. So we had to rebuild them in HTML5 in about a month, and we did, and it made us pioneers in Japan of this now near ubiquitous technology since it was not a necessity for anyone else.

How big a can a widget be? 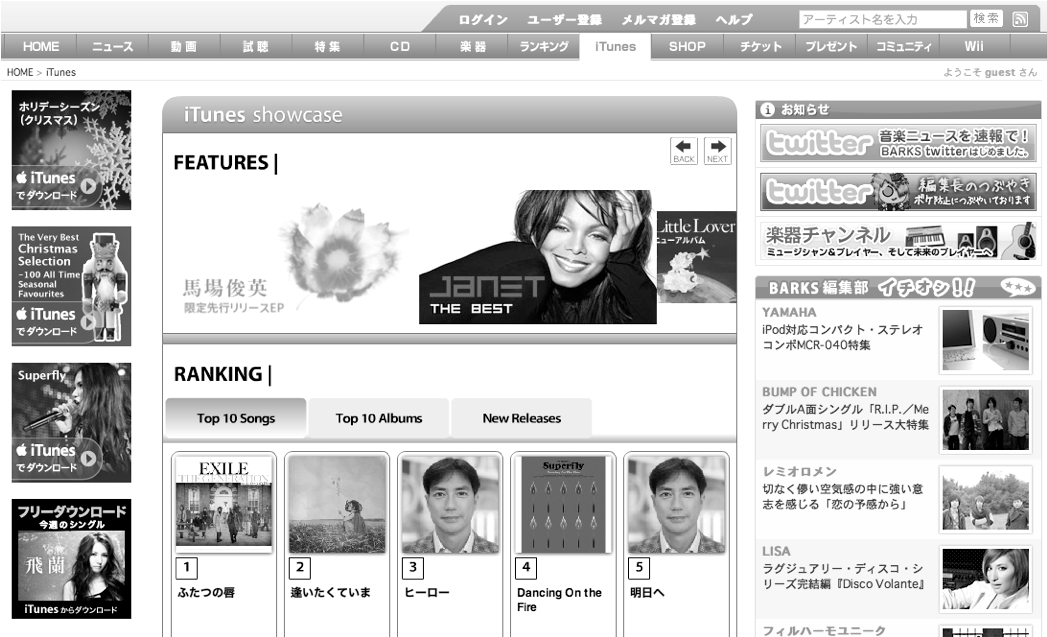 The blogparts also spawned a second bigger technology project which began when a small ISP portal site offered iTunes a tab on their portal in exchange for weekly updated content that would then fuel click-through purchase on the iTunesStore and hence affiliate revenue for the ISP portal. Building HTML pages every week was never our cup of tea, and besides would have been an inefficient investment for our client, so we hit on the idea of developing on top of the blog part engine to create fully automated main-column embeddable widget, and called it Partner Parts.

From the get go we saw Partner Parts as media product that could be used by multiple online distribution partners, from bigger portals to music community sites to web magazines, with minimal costs and total scaleability. Where the blogparts worked to distribute to the long tail of personal blogs, Partner Parts targeted the mid to high traffic site properties.

Unlike the blogparts, in order to work with multiple partners and for them to be able to customise their own widgets the system need to have an account structure and basic CMS, and a team to maintain them, and yes put them all in HTML5! I.e. more like a real web product.

We built this into a really solid solution, and got up to around 15 partners in Japan, and at one point we were in discussion with various Apple markets around the world to help them adopt the system. But the talk fizzled out and although we kept it going in Japan it never reached the scale we had hoped.

In retrospect I can connect the success of the iTunes Blogparts and the experience of trying to productise Partner Parts to the biggest blunder I have made in business. Their relative simplicity compared to the reach they were able to achieve gave me first hand experience of the scalability technology can give you, and a thirst to do it again, only bigger, and with the IP owned by us. I started trying to build out a development team within Alien-Eye, paid for by client projects, but aiming to build out our own products.

Of course the blogparts would have been nothing without the the massive content platform Apple had established with iTunes, its conviviality through the RSS feeds, and the momentum that the Apple brand had with early adopters consumers at that time, so it was in many ways a false lesson in instant scaleability. We were just joining a couple of dots within the realm of the brand. 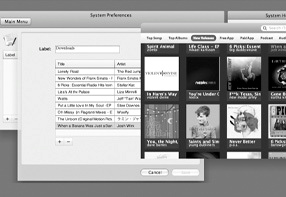 We were not the first digital agency to try to spin off a product, or pivot to a product strategy, and were not the last either, and while I am sure there are success stories, it seems to be a pretty hard thing to pull off. I believe having a hybrid team of technologists, marketing experts and project managers is actually pretty ideal, but they have to be focused on the same thing. To make the technology product you really need to be focused on it, and perhaps riding your luck on the marketing stuff leading up to making the transition, so you can get to a minimum viable product as quickly as possible then bite the bullet, fire your clients and get investment, not necessarily in that order. We lacked that focus, not least myself, and we also never found a leader for the development team, so the DNA of the company at the top was all marketing in background, and that makes it really hard to recruit, retain and have a technology vision to inspire and direct developers.

In the end the combination of the 2011 Touhoku earthquake and tsunami and a bubbly job market for developers in Japan at the same time brought about a mercifully swift end to the internal dev team experiment, but not before we had made some great mobile apps, social games and other projects I will be writing about in following episodes.

Incidentally now and Lowe Profero we have a couple of hundred developers in our office in Beijing doing development work for all the offices in the network, including ours. Having this kind of scale and competitive price advantage combined with quality assurance is the way to go.