Localisation is the process of turning brand communications, like TV ads, websites etc, from their original language and culture into something that works in another market, language and culture. In this post I am going to categorize 3  or 4 archetypal approaches to doing this and use well-known brands to illustrate. Hopefully anyone working in this space or interested in brands – or just global culture in general – can take something from it. 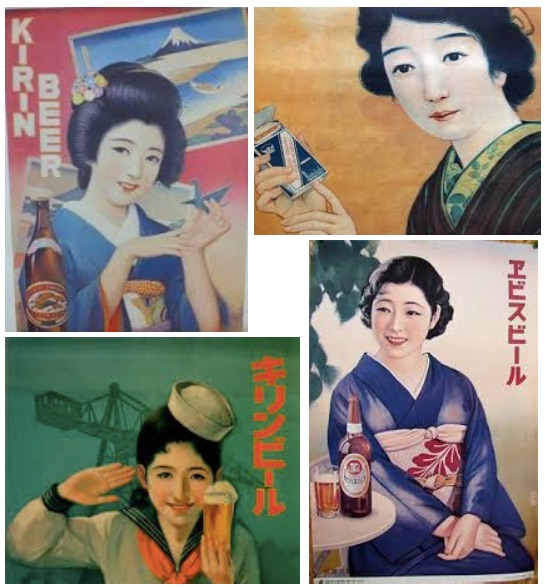 Japan has long been importing and adapting advertising formats – in this case beer poster girls!

I have seen this process from both sides, initially while working in the UK office of a big international agency, where we were the hub, creating and “distributing” campaigns to other markets. But ever since arriving in Japan I have mainly been “on the receiving end” as it were, and it is exacerbated by the fact that Japan really is a different market. Whether that difference is fundamental, or one of degrees, is a question I have explored in previous posts, such as this one describing the Japanese advertising industry, but for the purposes of this article I will focus mainly on the cultural and linguistic gap.

In fact, for many of the international agencies in Tokyo, most of the work they do is in-bound localisation, and if they are not empowered to properly adapt or transcreate the brand to Japan – which is often true – it can be quite an unrewarding role. It’s one of the reasons I actually got frustrated and struck out on my own from one of those big networks to start up my own agency here in Tokyo back in 2004.

Although 90% of the work we do at Profero Tokyo is original to Japan, from time to time we lead a localisation process, and when conducted in a strategic way, they never fail to reveal deep insights into the core brand DNA and highlight the fundamental similarities and differences between cultures, and hence can be fascinating and rewarding projects to be part of.

For simplicity I am going to look at localising brand taglines specifically, and use them as a proxy for brand positioning, because ultimately this is the point. I am going to use “tagline” to mean either the semi-permanent brand tagline motifs, as in “Honda – the power of dreams”, as well as product-brand taglines, and also campaign taglines, such as Apple’s “Mac vs PC”, which are obviously more transient, but essentially the process is the same.

In some of the examples, e.g. MasterCard, a campaign tagline ends up becoming the brand tagline, for a good few years at least, which is far from uncommon, so overall I feel confident generalising in this way.

It is also true that the same principles can be applied to other executional choices when localising e.g. the visual realm, choice of music, voice actor, you name it. All elements ultimately need to be considered within the same framework.

In general I think there are 3 approaches to bringing a global tagline into Japanese.

Approach 1: Leave it in English

Approach 2: “Adapting” it into the Japanese Culture

The Priceless tagline / proposition for MasterCard started off as a campaign but has more or less been woven into the fabric of the MasterCard brand as a permanent part of its identity. In general all credit card brands assert that when you pull out your credit card the brand name on it says something about who you are, and prestige often bordering ostentation is the traditional territory of the category. In contrast MasterCard’s agency developed this brilliant proposition:

“There are some things that money can’t buy. For everything else, there’s MasterCard”

The insight behind the campaign is that there are special moments in life, often serendipitous, usually shared with loved ones, that no amount of wealth could purchase. For a credit card brand (= access to money) to be dramatising this insight shows that the brand understands that there are more important things than itself. This implies that it is magnanimous, humble, and big-hearted, traits that many people would prefer to have associated with themselves. And besides the prestige can be communicated through the creative execution itself. It also taps into the post-80s/90s materialism sentiment that in fact luxury is at heart experiential, so it was and still is very much “of its time”. Copy lines never really work in isolation, and the high-end feel of the execution adds “luxury” attributes to MasterCard’s brand image.

“There are some things that money can’t buy. For everything else, there’s Mastercard” – Priceless Campaign localised to Japanese

The creative device evolved to become a very simple set up stating the price of an experience or thing, but then trumping it with an emotional outcome, which is “Priceless”. The simplicity of it is the hardest thing to adapt into Japanese, and actually this is always the case. The best copy lines or creative devices are sort of hacks of the language that manage to say something profound and impactful in a very simple way.

The only way to adapt this into Japanese AND retain the original meaning is to spell it out, but to find a copy line that does it in a relatively short and elegant way, and I believe they succeeded with “お金で買えない価値がある”, literally “there is value that cannot be bought with money”. MasterCard actually retain the English word “Priceless” as a branding device, more than because they assume their Japanese target would understand what it means. Many will not, but it becomes another branding device that adds value to the brand through repeated use.

Approach 3: Transcreation of the Concept into the Japanese Culture &Psyche

One of the things you learn from working in the adaptation and transcreation areas a lot is that really good copy in any language leverages ambiguities implied by the choice of words to claim as broad an emotional relevance as possible while still “feeling” sharp and precise.

A good example that is close to my own heart is for the brand Indeed, the world’s biggest job search site, and adapting its global brand platform “How the World Works” into Japanese for its Japan market launch campaign, developed by our colleagues at MullenLowe in Boston.

The genius of this tag line in English is that it is a familiar expression that implies wisdom and knowledge of a complex human system, but by matching it to the context of recruitment sets up a double entendre with its literal meaning of how people find work, which is of course the raison d’être of the Indeed brand. The sharpest of communication strategists among you will have noted that this is an inherently flexible device since it says “we know how the world of employment works”, and, by inference, how to get you the right job, or to the companies recruiting the right candidates, but it does not say what that “How” is. The “how” comes in via the creative.

With the Japan launch of Indeed in 2015 the “How the World Works” campaign, which doubles as a brand tagline, was transcreated to carry a similarly powerful emotional evocation: 「その仕事が、世界を動かす」which back-translated says, “work that moves the world”. Brand positioning connoisseurs will have already noted that the savviness double-entendre is not retained in this transcreation, and instead emphasises what is more emotive connotation to Japanese people, the idea that your work has a higher purpose in the societal sense – a core brand value for the Indeed, although one that is not made explicit in its English tagline. If there is an intended ambiguity, it is in the way that 「世界」in Japanese can been both “your world” and “the World”, which was exactly the range of mental scales that we want the brand to transcend.

As someone who works across Japanese and English everyday, I am tempted to believe that the Japanese language, because of the unique way it has evolved as a sequence of assimilations of foreign languages, is extraordinarily flexible in the options it gives copywriters to play with, an unprovable theory that I intend to explore in a future post.

Is there a 4th approach? Actually, I think there is. It is where the international brand’s communications are stratified into global creative, usually in the approach 1 or 2 adaptation approach, usually projected through traditional media like TV. But then in other “high touch” channels like social, digital engagement and event-based promotions, the approach is closer to approach 3), being highly contextualised. This is often also very pragmatic given the centralised structure of many global brands, since seeing the same TV ads go out in all markets is very reassuring to those brand stakeholders who are not necessarily engaged in the nuances of international market cultures, but allows the freedom to the more ‘under the radar’.

A good example of this hybrid approach is RedBull, at least for the first few years after they launched in Japan, when they ran the global “Gives you wings” animated TV creative but simultaneously built out their extreme-sports & music-based engagement programs. It is my impression (I am not a RedBull expert) that now as a mature brand in Japan they have dropped the “gives you wings” TV work and have built out their extreme sports and music platforms into the dominant local brand-building platform, and very effective it is too. 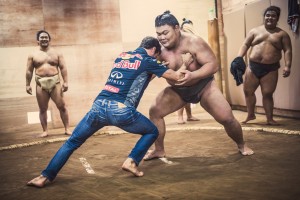 Idealism vs Pragmatism: what is the true path?

Ultimately I do not believe there is a single “right way” since brands exist in the real world where budgets and mental bandwidth can be constrained, and so I can accept that any of the 4 approaches above could actually be the correct choice for the organisational context in which the decision is made, and all of them can work. But from the point of view of someone like me who loves to help brands resonate, flourish and become the transcultural conduits of fresh ideas and compelling propositions, approach 3 is the most exciting to be part of.